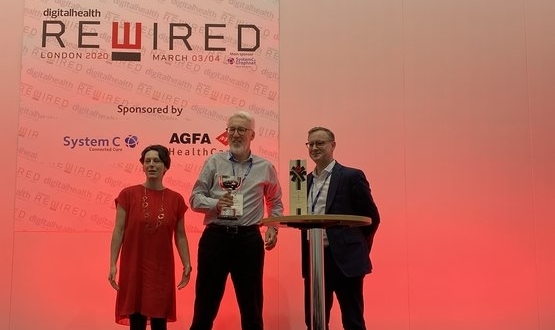 A device which is said to give temperature readings accurate to 0.5 of a degree has been named winner of the 2020 Rewired Pitchfest.

Celsium is placed in a patient’s armpit and is capable of providing a temperature measurement every four seconds. Unlike a traditional thermometer, is is entirely non-invasive.

“Currently if you are in a hospital bed for eight hours, your temperature will be taken two or three times,” Des Beattie, chief commercial officer of Celsium, told the Pitchfest judges.

“With Celsium, over an eight-hour period your temperature is taken 7,200 times. If there is any change in temperature, you can see when it varies, an alarm sounds and clinical intervention is much faster.

“It’s an early warning system for any amount of different conditions. Sepsis, TB, malaria – it can operate across all of those with the ambition to try and reduce the clinical impact of those conditions.”

As winner of the Pitchfest, Celsium will be offered the unique opportunity to have their innovation tested and scaled at Chelsea and Westminster Hospital NHS Foundation Trust through the CW Innovation Programme – a collaboration between the trust and its charity CW+.

Chris Chaney, the co-lead of CW Innovation, said he was looking forward to working with the Celsius team “to test the device’s feasibility in the real world and hopefully support wider dissemination of this new and entrepreneurial solution across the NHS network”.

“It was fantastic to see such a range of exciting health innovations and ideas from start-ups and entrepreneurs at the final today. There is certainly no shortage of ideas and passion in creating innovations that can deliver transformational improvements in patient care,” he added.

Celsium beat off a total of 90 entrants to take the top honours at Pitchfest, which was sponsored by StopJump.

The final ran during the Digital Health Rewired conference and exhibition, held today at London’s Olympia. It was hosted by Tara Donnelly, chief digital officer at NHSX. The trophy was presented by John Atkin, chief operating officer at SoftJump.

The other finalists – all highly praised by the judges – were Cambridge Cancer Genomics, an AI platform for oncologists; Family Mental Wealth, an app which aims to help build mental wellbeing in families; and Feebris, which uses IT to improve access to early diagnosis for vulnerable patients.

Before this year’s victor was named, last year’s took to the stage, Andrew Botham explained that TestCard, a device that embeds a urine diagnostic device into a postcard, has made significant progress in the past year – including a partnership with the Bill and Melinda Gates Foundation.

He said initiatives like Pitchfest were vital to innovative start ups. “As start ups we have small voices, and it’s by engaging in these sorts of programmes that our voices get a little bit louder,” he said.