China is charging full speed ahead into electric vehicles, on track to sell over 2 million EVs this year, from 1.1 million in 2018. The rapid growth has been driven partly by policy, but increasingly by consumer demand. A rising proportion of Chinese consumers simply prefer electric vehicles to traditional combustion vehicles, viewing them as a new and superior technology, and better value. With EVs continuously improving and getting more affordable, there’s a clear path to EVs taking 50% of market share in China by 2025. 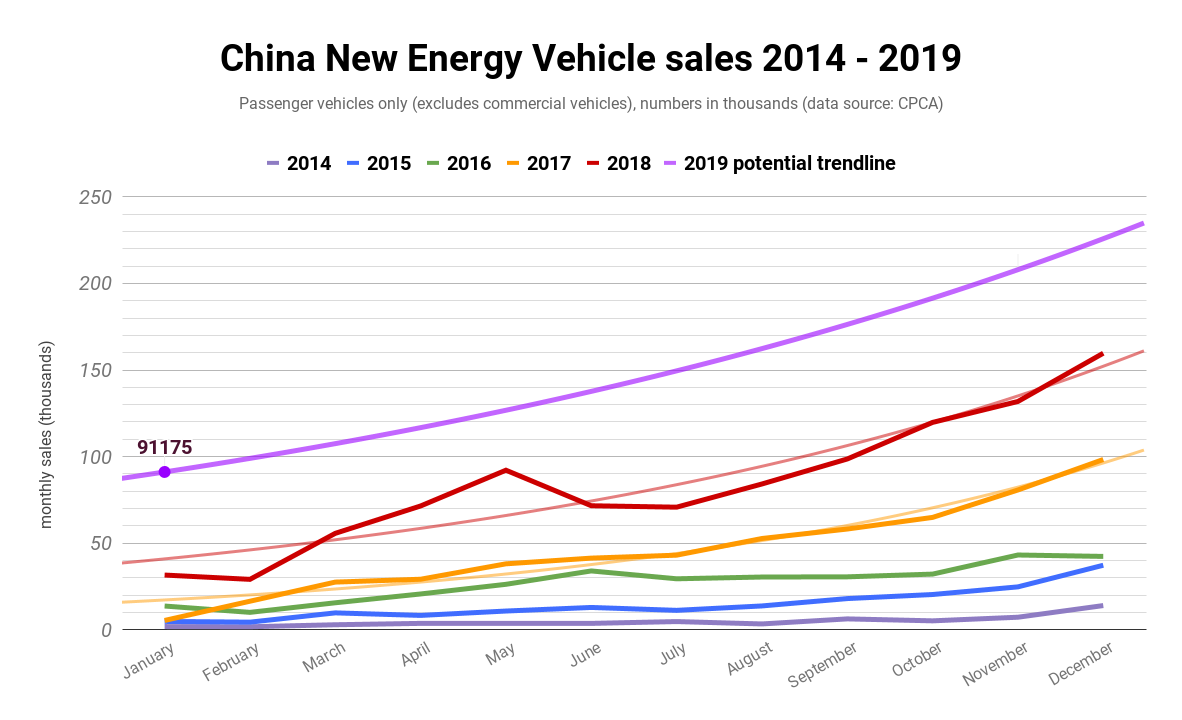 We have seen from China’s January 2019 numbers that EVs are on track for 2 million sales in the country this year. This will be an 82% year-on-year growth in volume over 2018 (1.1 million sales), depending on how you tally up the exact numbers. The EV market share of total vehicle sales will very likely increase from 4.1% in 2018 to 7.5% in 2019.

The goal of this article series is to describe some of the dynamics behind China’s fast transition to EVs, and to give my reasoning for making the prediction that China’s EVs will achieve over 50% market share by 2025. Here’s a graph of what I think the coming few years’ sales numbers will probably look like: Mainstream analysts and industry consultants have been predicting a much longer march to 50% market share, based on all kinds of faulty assumptions, or over conservatism. I recently showed that Deloitte’s general outlook for global EV growth is full of basic factual errors and demonstrates an inadequate understanding of consumer preferences and transition dynamics on the ground. One of the reputedly more progressive analysts, BNEF, predicts China’s EV market share reaching 20% by 2025. However, BNEF has had the honesty to admit that many of its forward projections in the new energy space are consistently and “embarrassingly” behind the curve. (Editor’s note: BNEF analysts have also admitted this to CleanTechnica.)

For a consultant, it’s safe to give a projection which errs on the cautious side, underestimates the rate of change (and is totally forgettable). It’s riskier to give what might appear to be an aggressive, bullish projection (which leads your clients to invest a lot of money), and then be blamed if actual growth is less impressive.

What can I say about the forecast here? Make (or don’t make) investment decisions at your own risk, and if you’re a legacy auto company, by all means keep listening to cautious consultants if it makes you feel you’re still king of the hill. But you should also know that the rise of EVs will quickly create new large players (in all parts of the industry) who steal market share from sleeping incumbents.

I’m going to get to details of how I estimate the ramp up of EV production in China in part 3 of the series. Most importantly, we will look at China’s astonishing growth in investments in lithium-ion battery factories and capacity, which are the key enablers of the fast transition to EVs. Before that finale, we’ll look in part two at consumer culture in China, understand the place of autos in the society, and explore why EVs are quickly stealing market share from combustion vehicles.

But let’s start in part one, by understanding the motivations of China’s policy push to move away from fossil fuel vehicles and towards EVs.

China’s government wields a strong hand of policy mechanisms to steer the market towards desired outcomes much more readily than most other societies. Why are EVs, or rather, NEVs (new energy vehicles) a desired outcome for Chinese policymakers? There are four main reasons, and a host of supporting motivations.

First off, unlike the troglodyte currently on Pennsylvania Avenue, China’s leaders are serious in their commitment to climate change. With the world’s largest market for vehicles, that alone is a good reason to transition road transport away from carbon-emitting fossil fuel combustion, and towards EVs.

Secondly, most oil used in the country is imported into China. Just over a year ago, China surpassed the US in having the world’s largest volume of crude oil imports, and the amount has been rapidly increasing year by year. Rapidly transitioning the road transport fleet to EVs can help to turn this situation around, improving China’s energy security as well as its economic balance sheet.

Third, and perhaps most apparent to our senses, we’re all aware of the terrible pollution that is plaguing China’s metropolises. Although a potion of this is from industrial activity, vehicle pollution in and around the cities is also a significant contributor. Many large cities have deliberately reduced the ability of new combustion vehicles to get license plates (via expensive auctions, like in Shanghai, or lottery systems, like in Beijing) from the start of this decade (or earlier), in an attempt to reduce road pollution as well as traffic congestion. EVs, however, are often unrestricted or have a much easier path to getting a license.

The fourth main consideration is that industrial policy also plays a role in the push for EVs. Although China now has decent purely domestic carmakers, in addition to the local joint-venture automakers formed from domestic firms partnering with foreign OEMs, vehicle exports have not been a strong area for China. This is in large part because China has always been playing catch-up with combustion engine technology compared to the established international players. Both Japan and Korea have navigated the auto production and exports path with some success, and China wants a piece of the action.

The EV industry, being based on a new technology, has not yet settled into market dominance by existing players, so offers China an opportunity to get a head-start. China can leapfrog from its trailing position in combustion technology to become a major global producer of EVs, and potentially realise the exports goal.

What Concrete Policy Measures Has China Taken Towards Promoting EVs?

The Chinese state has been conducting EV research since the early 1990s, and more strongly in the 2000s before adopting formal policy support and incentives in 2009. Initially incentivizing fleet purchases for certain government organisations, then taxi operators and other fleets, policy later added monetary incentives and purchase tax exemptions for private buyers. Other incentives have included sometime use of bus lanes and a free or reduced pass at toll roads, as exists in Norway.

China is now in a phaseout of the monetary incentives (all gone by the end of 2020), some abuse of which occurred, which led to investigations and policy tightening in 2016. This ICCT flowchart only represents a part of the complex new NEV credit system! (Image borrowed from theICCT.org, but blurred to avoid stealing their thunder. Read their detailed reports to get the full lowdown)

Starting fully from 2019, an escalating NEV manufacturer credits system is now in place, with NEV credits linked simultaneously to fuel consumption requirements for the combustion vehicles that manufacturers produce (the “dual credit” system). This is a complex system that I won’t try to summarise in detail here. If you want full immersion, check out the ICCT’s policy update for a deep dive – the image above gives you an impression of their useful “concept map” of how the dual credit policy works, and there’s the original version and a lot more detail that the ICCT reports cover.

Suffice it to say that the NEV credits policy further pushes all major automakers selling in China towards NEVs, gives extra rewards for EV efficiency and range, allows buying and selling of surplus credits, and has penalties for credit deficit and fines or production bans for overproduction of inefficient combustion vehicles. This will result in combustion vehicles getting more expensive to produce, and EVs getting cheaper, and continued fast growth of the EV industry. The passing grade ratchets up significantly year by year, with the national government yet to decide the steepness of the ratchet from 2020 onwards, likely watching closely how the initial 2 year period (from now till the end of 2020) plays out. Initial results under the new NEV policy scheme seem positive for EVs, with January 2019 sales being very strong.

In addition to the national policy, cities and provinces have their own policies and subsidies, on top of the license-plate schemes mentioned above. This has sometimes turned into a local form of industrial policy (and competition between regions). Shanghai favours PHEVs, which are made in significant proportion by the city’s local auto manufacturer, SAIC, while Beijing favours fully electric vehicles, the speciality of the city’s local auto champ, BAIC. Shenzhen has shown similar support to local BYD. The national government is requiring the various city and provincial monetary subsidies to be wound down and replaced with investments in growing charging infrastructure and other means of support. The license-plate schemes and other local sticks-and-carrots will stay in place.

Other measures have included recently allowing dedicated international EV producers to operate in China autonomously without the local joint-venture partners obligatory to combustion vehicle OEMs. This has allowed Tesla to get a jumpstart on its Shanghai Gigafactory and much positive support from the regional (and national) government and financial institutions.

Since 2015, there’s been an official interim national goal of achieving 2 million annual NEV sales by the end of 2020, but it looks like that number will be achieved this year. There’s also been a goal in place of achieving at least 20% market share of total new vehicle sales by 2025. Though, that will likely also be far surpassed by the pace of change on the ground, and the fact that overall auto sales have not risen in volume since 2017 (somewhat unexpectedly). There’s a lot more fine detail to China’s policies to promote NEVs, but this quick tour should have given you a taste of it.

China is not fiddling around at the edges, or trying to placate large auto companies (catch that, Angela Merkel?). China is all-in on EVs. So much so that US and European legacy automakers went crying to their own governments not long ago at the “too difficult” new NEV policies.

Whatever you might think about China’s political economy, it is not a culture where the narrow short-term interests of entrenched powerful corporate elites can hold undue influence over the society’s key decision-making processes to the detriment of others, at least not for long. The same cannot be said of the US or, apparently, sometimes, Germany.

In part two of this series, we’ll look beyond the policy push and into the demand-side pull for EVs coming from Chinese consumers. What’s different about Chinese culture and auto usage patterns that make EVs more attractive in China than in Europe or the US? Check in again in a few hours.