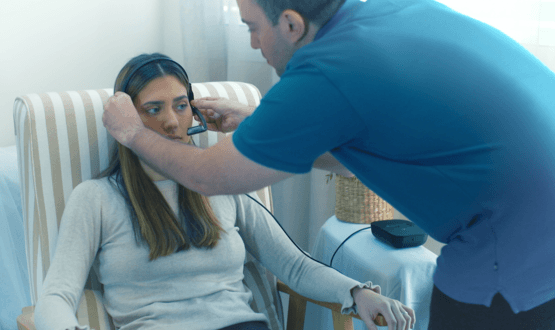 The creators of a wearable for individuals with locked-in syndrome have launched a crowdfunding campaign to bring their device to the UK.

EyeControl is an eye-tracking communications device designed for patients who have lost the ability to move or speak, typically as a result of traumatic brain injury, stroke or conditions such as motor neurone disease (MND).

Created by Israeli healthtech firm EyeFree Assisting Technology, EyeControl consists of a head-mounted infrared camera that tracks the eye movements of a wearer and translates it into audio communication via a speaker.

A crowdfunding campaign has now been launched with the aim of sponsoring devices for individuals with motor neurone disease in the UK.

Or Retzkin, CEO of EyeControl, said: “What makes the EyeControl unique is that it has the ability to provide the user with independently controlled communication.

“The EyeControl introduces a new reality of accessibility for locked-in individuals to communicate with their friends, family, and carers.

“Individuals are now able to communicate immediately upon waking, while in the bathroom, indoors, outdoors and even while travelling – situations that alternative devices have not been able to accommodate.”

A bone conduction element that sits within the earpiece provides audio feedback to the user, allowing them to hear the communication before it is sent to the output speaker. The wearer can use predefined sentences or teach EyeControl their own personalised syntax, as well as choose from a range of output languages.

The device features Bluetooth wireless technology and works without a screen. It has been designed for 24/7 communication, a feat its creators claimed had not been achieved by previous solutions.

Locked-in syndrome is a condition in which patients have full cognitive ability but are unable to move or speak, making communication all but impossible.

According to figures from EyeControl, six people are diagnosed with MND in the UK every day, with up to 5,000 adults in the country affected by the condition at any one time.

The company has pledged to fund-match money raised by the public in its launch campaign so that it can provide as many devices as possible free of charge to patients.

“We hope to inspire a new sense of independence for these individuals,” said Retzkin.

“We are excited to be working with local communities across the UK and with local professional organisations who are nominating members of their community to receive a device.

“We also hope to raise awareness of the importance of giving these patients the independence they gain through communication devices.”