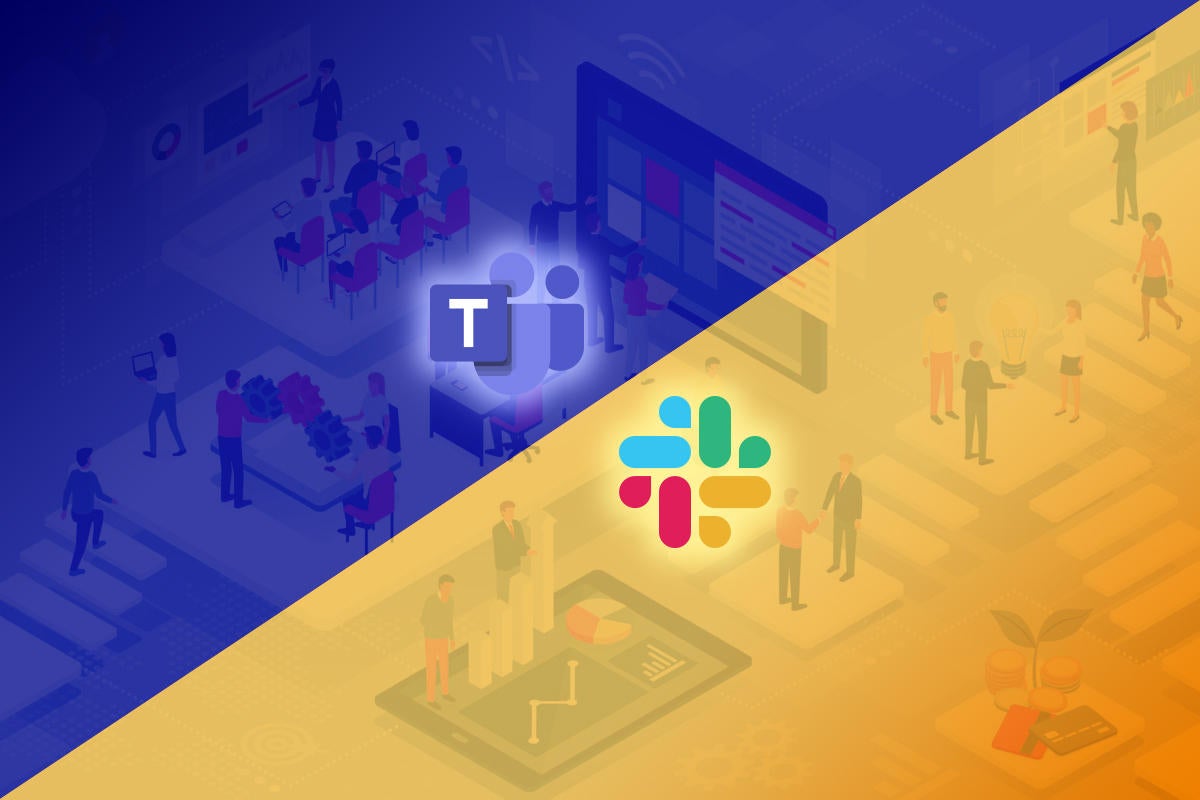 Competition between Slack and Microsoft over their respective chat apps has intensified recently, as the two companies clash over new usage stats – with Slack’s share price tumbling last week in the wake of new adoption figures for Teams.

Microsoft last week announced that Teams now has 20 million daily active users, up more than 50% from 13 million in June. The publication of those user figures appeared to have an immediate impact on Slack’s share price, which saw an 11% drop the following day. In fact, Slack’s share price has fallen by more than half since its public listing in June – an apparent sign of investor concern over its ability to compete with Microsoft long-term.

Launched by Microsoft in 2017, Teams is available at no extra cost with certain subscriptions of Office 365; the suite has more than 200 million monthly active users. It competes with Slack and others in a team collaboration software market worth $3.5 billion this year, according to IDC analysts.

However Slack – which announced it has 12 million daily active users in October (up from 10 million in January) – has frequently called Microsoft’s user metrics into question, claiming it does not measure daily use the same way.

Daily active use and the battle of stats

The upstart contends that its customers spend more time using its application productively each day, with individuals logged in for more than nine hours, on average. This includes 90 minutes of active interaction, the company said, such as sending direct messages or reading posts in public channels.

“As we’ve said before, you can’t transform a workplace if people aren’t actually using your product,” a Slack spokesperson said in response to Microsoft’s user figures, which it claims are overinflated.

Microsoft said it defines daily active use as “the maximum daily users performing an intentional action in the last 28-day period across the desktop client, mobile client and web client.”

Examples of such actions include “starting a chat, placing a call, sharing a file, editing a document within Teams, participating in a meeting, etc.”  Microsoft said it removes “passive actions” like auto-boot, minimizing a screen, or closing the app from its calculations, and de-dupes all actions across a single user ID.

The spokesperson added there were 27 million voice or video meetings held in Teams in October, and 220 million “open, edit, or download actions” on files held in Teams. That equates to 11 such actions per user each month, on average.

Slack meanwhile said there are more than 5 billion user actions each week, such as reading and writing messages, uploading and commenting on files and interacting with apps.

Angela Ashenden, principal analyst at CCS Insight, said that the focus on granular levels of app use amounts to more than just posturing by Slack, serving to highlight how central the app can be to team workflows.

As Slack contends, its app is often central to a range of team interactions and workflows.

Ashenden said that, while Microsoft’s adoption figures are certainly impressive, much of Teams’ traction appears to center on meetings, thanks to Microsoft’s decision to essentially move Skype for Business Online and its users into Teams, rather than supporting employee workflow, as Slack claims to do.

“At the moment, Slack definitely has the edge in true workstream collaboration, both in terms of capabilities and customer usage,” said Ashenden.

“Slack’s discussion about active interaction on the platform might sound pedantic, but it does highlight how central its platform is to its users’ daily activities – it’s part of their workflow, and this makes it very sticky.”

She added that, while Microsoft has made moves to improve Teams as a workstream collaboration tool, with renewed focus on integrations and automation tools such as PowerApps and Power Automate, it still lags behind Slack.

“Until Microsoft gets a better story here, in terms of its communication to customers as well as its third party integration and developer/partner support, Slack’s position remains strong,” she said.

The gloves come off

Rivalry between the two companies has existed since Microsoft first announced the creation of Teams in 2016. Slack’s response was to take out a full page ad in the New York Times, to “welcome” Microsoft as a competitor.

CEO Stewart Butterfield has been more publicly critical of the Microsoft in recent weeks. During an on-stage interview with WSJ Tech Live last month, Butterfield accused Microsoft of “surprisingly unsportsmanlike conduct,” claiming the company has offered to pay businesses to use Teams, and took Microsoft to task for releasing Teams adoption stats soon after Slack’s post-public listing, a federally mandated quiet period for the company.

“The bigger point is that’s kind of crazy for Microsoft to do, especially during the quiet period,” he said. He added that “I think they feel like we’re an existential threat.”

Butterfield also questioned the popularity of Teams among users, noting that most the popular Google searches for Microsoft Teams relate to ways to uninstall the application.

“All of the top searches are how to uninstall, how to stop it from popping up, how to get rid of it,” he said. “So there is a very aggressive push to get people in there.”

On Thursday, Slack’s PR team also hit back at Microsoft on social media, tweeting a video that compared promotional videos for their respective products to show clear similarities. The tweet text read “OK, boomer,” referencing a meme in order to mock the perception of Microsoft as old and out of touch.

Microsoft has also fired broadsides recently. In an interview with The Verge, Jared Spataro, corporate vice president of Microsoft 365, said that Slack lacks the “breadth and depth” of Teams.

“Everybody has a different way of measuring things; what success looks like for us might be different to somebody else. But I have wonder if, hypothetically, spending nine hours a day in a chat app is a good productive use of time,” said Shaw.

“We are not trying to replace email with chat,” responded Spataro. “If someone is spending nine hours in a communications tool, we wonder is that really where you should be? We look at Teams as this hub where its strength undoubtedly is the underlying Microsoft 365 workloads. That is what is all about.”

How will Teams’ growth affect Slack?

While such talk is par for the course between two competing companies, it shows how seriously the two firms are throwing rhetorical elbows. Last year, Microsoft, with a market cap of more than $1 trillion, listed Slack as an official competitor to its Office suite in its annual 10K report, placing it alongside Apple, Cisco, Google and IBM.

And it reportedly put Slack on a list of internally banned apps, ostensibly for security concerns. (Slack’s CEO claims there are still pockets of use within the company.)

Perhaps the most significant sign of competition between the two  is the scale of Microsoft’s investments in building out Teams. In addition to deepening integrations with Office 365 tools, it has introduced a wide range of features, including capabilities to support “frontline” workers. At its Ignite event, there was a notable increase in the volume of Teams announcements, including the launch of private channels, an important feature Slack has had for some time.

And Teams has plenty of room to grow, too, with only a small proportion of Office 365 customers currently using the app.

Despite Slack’s swift uptake – it has claimed to be  the fastest growing business app of all time – and growing revenues, the company has yet to make a profit. It reported an annual loss of $138.9 million for the fiscal year ending Jan. 31 on revenues of $400.6 million. In its most recent quarterly results, Slack posted higher-than-expected revenues of $145 million.

Slack has struggled at times since its public listing in June. Despite its swift uptake – it’s regarded as the fastest growing business app of all time – and growing revenues, it has yet to make a profit. It reported an annual loss of $138.9 million for the fiscal year ending Jan. 31, 2019 on revenues of $400.6 million. In its most recent quarterly results, it posted higher-than-expected revenues of $145 million.

Nevertheless, it has continued to attract more users in the past year as it has added automation capabilities, improved links with email (including Microsoft’s Outlook), while boosting security and management capabilities in Enterprise Grid, which is aimed at large businesses. Slack sees big potential in the long term, and estimated in its S-1 filing that the market has a potential value of $28 billion

While Slack and Teams play in the same market, the impact of Teams on Slack’s growth can easily be overstated, said Larry Cannell, a research director at Gartner.

“Certainly, users in Office 365 enterprises are getting exposed to Teams, but that alone does not guarantee success,” he said. “Also, Slack has a fair amount of momentum all its own with some extremely passionate users.”

For many companies, this is not necessarily an “either/or” scenario; in many cases, businesses are using both apps.  (Computerworld employees have access to both apps.) According to Slack’s CEO, the majority of its customers also pay for Office 365 too.

Cannell added that, while it is natural for any company to be concerned when Microsoft offers up a successful competing product it is too early to see who will come out on top.

“Successfully using either product requires changes in how groups operate on a day-to-day basis,” he said. “Each vendor is taking different approaches to encouraging or enabling this behavioral change and is too early to tell who will be successful.”