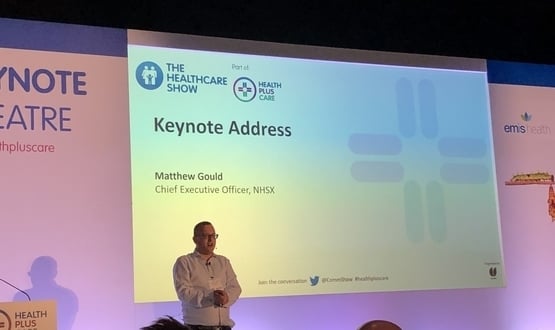 The CEO of NHSX has said he understands the “scepticism” surrounding NHS IT but that the new unit provides a “huge opportunity”.

With NHSX launching on 1 July, Matthew Gould opened his keynote at the Digital Healthcare Show with a joke to say he only had “no more than 90 hours” to change his mind about the job.

He also added that despite his well-tweeted tour of UK, he was not “running for the leadership of the Conservative Party”.

During his keynote on 27 June, Gould explained that NHSX will bring departments together; Department of Health and Social Care for national policy matters, NHS England for links to the system and NHS Improvement for spending controls.

However, he acknowledged the fact that NHSX follows a long line of much-promised IT change across the health system, such as the National Programme for IT and Care Dot Data.

Gould said: “I know you’ve seen this movie before, the big bang announcement with a shiny new leader who has all the optimism before the fall.

“I understand the level of scepticism that we are going to be operating in.”

Following on from this, Gould, who was announced as CEO of NHSX in April 2019, said the body would not be interested in “big bang projects”.

Instead NHSX, which has been tasked with overseeing digital transformation across the health service, will be focused on issues such as standards.

Gould said: “The most important thing we will do is set the rules so our systems can talk to each other, so that our systems are secure and help keep patient data safe.”

He also said that NHSX will “allow NHS organisations to buy or build whatever they want.

Gould added: “You know the needs of your staff and patients, you should have control over the tech you have.”

Despite the long list of missions and goals for NHSX, Gould said he was “very nervous about over promising”.

He brought his keynote to an end by saying: “We have a huge opportunity here, if we get it right I am sure we can make the lives of people better.”