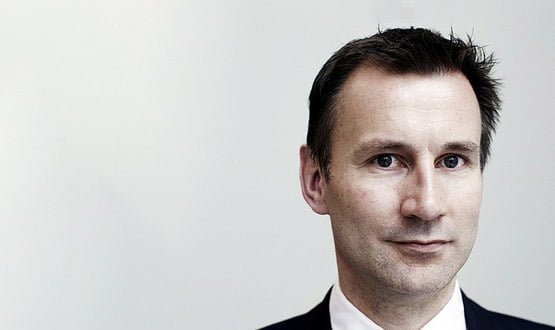 Former health secretary Jeremy Hunt has been elected as the new chair of the government’s health and social care select committee.

Hunt, who takes over from Dr Sarah Wollaston, will lead a committee of MPs tasked with examining the policy, administration and expenditure of the Department of Health and Social Care, and the performance of the NHS in England.

Hunt was the longest-serving health secretary, serving from 2010 until 2018, when he was replaced by Matthew Hancock.

Following his appointment on 29 January, Hunt said improving mental health services and social care were among his highest priorities.

“Over nearly a decade in frontline politics, the NHS has always been my greatest political passion, and I am honoured to have been elected Chair of the Health and Social Care Select Committee,” Hunt wrote on Twitter.

“For my last six months as Health Secretary, social care was formally added to my responsibilities but it was not long enough to bring forward reforms or – more crucially – a funding settlement for social care.

“That is what I will be pressing for, because the NHS will continue to fall over every winter until we fix social care, risking both patient safety and staff morale.

“I’ll also focus on making faster progress on mental health & patient safety; recent maternity scandals show we can never be complacent. I look forward to working with my committee to provide a strong, independent voice that supports NHS staff & patients in a very pressured period.”

Over nearly a decade in frontline politics, the NHS has always been my greatest political passion, and I am honoured to have been elected Chair of the Health and Social Care Select Committee.

Hunt was a high-profile and often controversial figure due to his role in changing the junior doctors contract – a divisive move that severely damaged his reputation among medical staff.

Yet he also pushed relentlessly for technological improvements in the NHS, a mantle that has now been passed to Matthew Hancock.

Speaking at the Policy Exchange in December 2019, Hancock renewed his pledge to invest in technology, announcing a new ‘digital aspirant’ programme to help NHS providers deliver on key digital objectives.