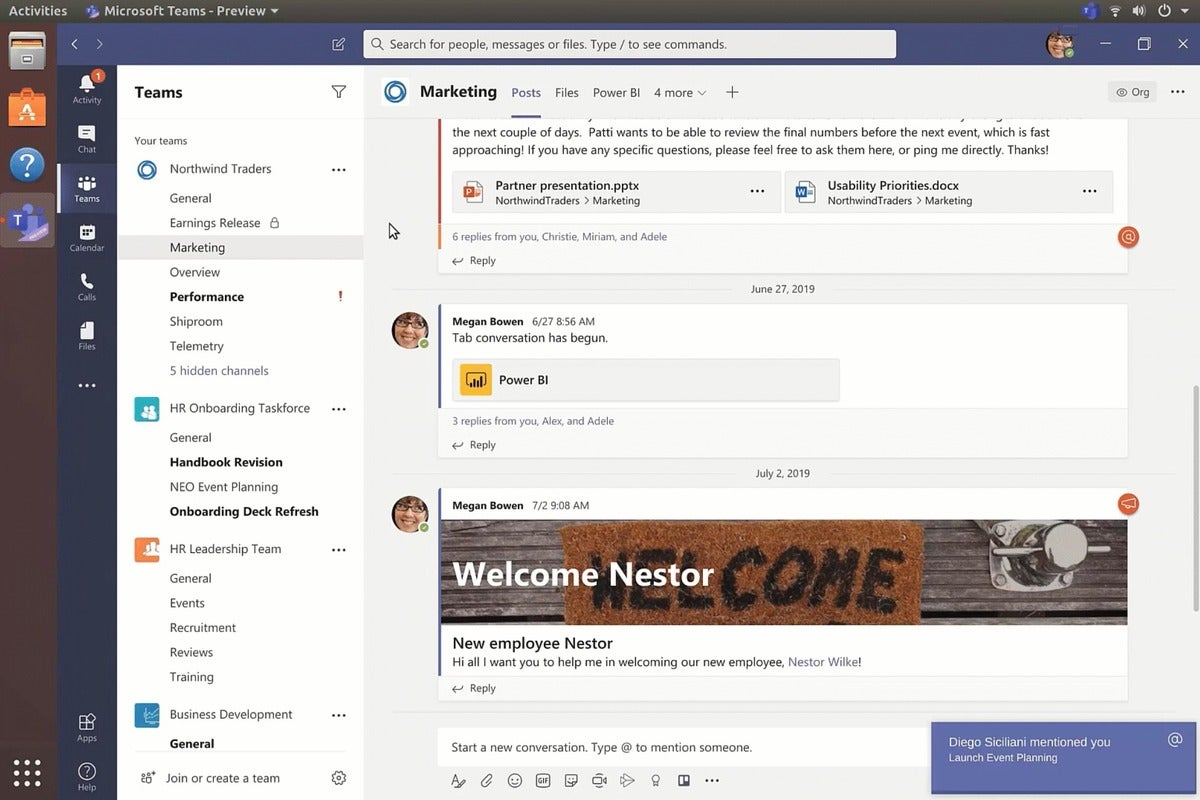 Microsoft Teams is now available on Linux as a public preview, the first time an Office 365 application has been brought to the open source operating system.

A native Linux client has been one of the most requested Teams features on Microsoft’s User Voice forum; plans to introduce were announced at the company’s Ignite conference last month. The app will feature all of the core Teams capabilities available in Windows and MacOS versions.

Native Linux packages can be downloaded in .deb and.rpm formats.

“We are committed to supporting mixed environments across our cloud and productivity offerings, and with this announcement, we are pleased to extend the Teams experience to Linux users,” Microsoft said in a blog post Tuesday. “It’s also an exciting opportunity for developers who have built apps for Teams to be able to grow their reach to this new set of users.”

The new Teams app will help connect employees at Swedish car manufacturer Volvo, where Linux is in use by several departments.

“Up until now, our Linux users have largely been stuck on a collaboration island with different unofficial and unsupported clients for Skype for Business and more recently Microsoft Teams,” Jimmy Beckman of Volvo Cars said in a statement. “With Teams for Linux from Microsoft, we have been able to leave that island and collaborate across our different platforms with the full functionality of a rich client. …Being able to participate in screen sharing is a huge improvement for the Linux users at Volvo Cars.”

Microsoft claims that Teams has grown to more than 20 million daily active users since its launch as a rival to Slack in 2017.

By introducing a Linux client, Microsoft is hoping to increase the appeal of Teams to developers –  an area where Slack has typically held a stronger position.

“Microsoft knows it needs to have a better story here, and I think this is the first sign of the company investing strongly in this opportunity,” said Angela Ashenden, principal analyst at CCS Insight.

“A Linux client for Teams has been one of the biggest requests on its ideas community, UserVoice,” she said. “So there is clear demand and Microsoft no doubt recognizes this as a tangible and relatively straightforward first step to engaging this audience better.”

Microsoft recently announced another highly requested feature, bringing private channels to Teams. This lets users create channels that that are viewable and accessible only by specified co-workers, which can be useful for teams dealing with sensitive or confidential content. Another requested feature, multi-window chat, is also on its way.

This story, “Microsoft Teams comes to Linux” was originally published by