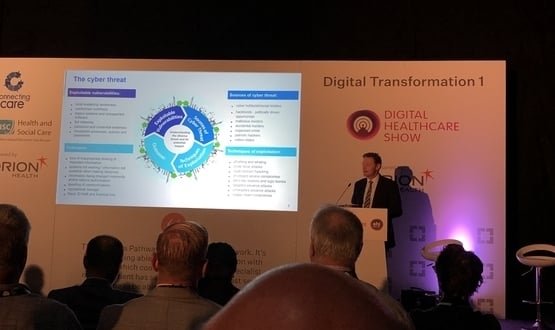 A Chief Information Security Officer (CISO) for NHS Digital has said one of his aims in the role will be to ensure patient information is protected.

Speaking at the Digital Healthcare Show, Dan Pearce, who was listed as NHS Digital’s CISO (AI), said one of his main priorities was to “protect patient safety”.

Pearce, who told the audience he had only been in the job for six weeks, also said he hopes to “protect the reputation of the health system” and ensure there is “patient trust” in terms of their data.

He also said one area NHS Digital wants to focus on is the ever-shifting landscape and keeping up to date with “new environments” which are constantly being created.

Board level responsibility for cyber, as well as simplifying the confusion around the subject, were also listed as priorities for NHS Digital.

It has not been confirmed whether Pearce is a replacement for former CISO Robert Coles, who resigned in January 2019. NHS Digital has been contacted for comment.

Another speaker at the event was Tara Donnelly, who said the soon-to-be launched NHSX, would not be able to “do everything” but can “change the mood music” when it comes to digital policy within the health service.

The chief digital officer at NHSX also gave a teaser of what NHSX will be doing following its official launch on 1 July.

Donnelly also gave a mention to NHS Digital, whose future has been debated since NHSX was announced.

She said NHSX would mean NHS Digital would have a “single commissioner rather than many”.

On day one of the show, delegates heard from the health lead for Google DeepMind who teased that Artificial intelligence (AI) could soon be used in predictive medicine to manage conditions before they occur.

Henry Ireland, an innovation advisor, also gave the audience his four tips to drive change in the healthcare sector.