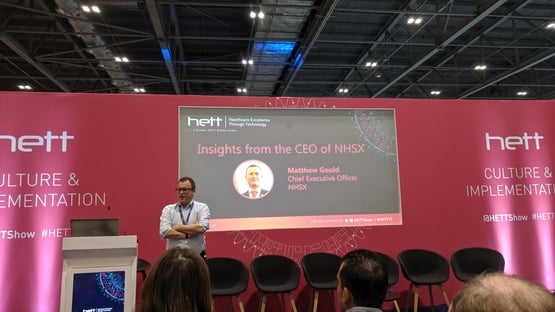 NHSX must focus on getting resources to clinicians on the frontline and ensure it does not “grow an enormous empire at the centre”, Matthew Gould has said.

Speaking at HETT in London on 1 October, the NHSX chief executive discussed the importance of working more closely with the health-tech sector to identify the barriers that prevented innovation being adopted across the NHS.

Rather than mandate work from the centre, NHSX will instead focus on providing solid foundations upon which innovators can sell and scale their technologies more quickly across the NHS, Gould said.

The issue of scaling, as opposed to a lack of innovation, is the main problem facing NHS digitisation, he argued.

Gould also acknowledged that the NHS “hadn’t made it easy” for health-tech companies to sell into the system and scale across it.

“We haven’t always been great as the NHS at identifying for the market what it is we need and what it is our patients need, and articulating that in a way that’s helpful,” said Gould.

Gould noted that the “fail fast” mentality of the technology industry and the more cautious approach of the NHS meant that the conflicting cultures often came at loggerheads.

“On the one hand you have the culture of the NHS and medical professionals, which is risk adverse. And that’s absolutely correct, because when patient safety is at stake the idea of failing fast and breaking things isn’t appropriate,” he told the audience at ExCel London.

“Then you have the tech world, which is all about moving fast and apologising later, and pivoting. It’s geared towards constant disruption and incessant change.

“That has led to a way of doing things where innovation takes time, and this can be incredibly frustrating to innovators.”

To drive the issue home, Gould offered statistics from NHS Improvement suggesting the time lag between beginning clinical trials of a new technology and its full roll-out across the NHS averaged between 16-17 years.

“When you compare that to the speed of cycle of technical innovation, you start to see the strong difference of the cultures and reasons for frustrations,” Gould said.

On the role of NHSX, Gould said the organisation would focus on “real-world outcomes” by working more closely with the health-tech sector – something that has historically proved problematic owing to the spread of various responsibilities across DHSC, NHS England, NHS Improvement and NHS Digital.

“My predecessors, who were trying to get technology right for NHS, had to spend a lot of time managing this institutional complexity,” Gould said.

“The point about NHSX was to bring all the levers together in a single place. Our hope is that, by bringing these together, we can try to make progress in getting the technology right.”

Gould noted that this required a joint effort with health-tech sector and suggested that innovation was “not going to come from the centre”.

Instead, NHSX would help set standards and create platforms on which innovators could build upon, as well as determining the barriers that prevent digitisation spreading more quickly.

“I think the heart of the problem is not shortage of innovation – the frustration is innovators find it very difficult to scale,” Gould added.

“I’m under no illusion about the scale of this challenge. Bits of the system are still using old technology, and some networks are not sufficient. There is a long way to go.

“We have a lot of work to do, but if we can get it right, the rewards for staff at frontline, patients and innovators will be huge.”