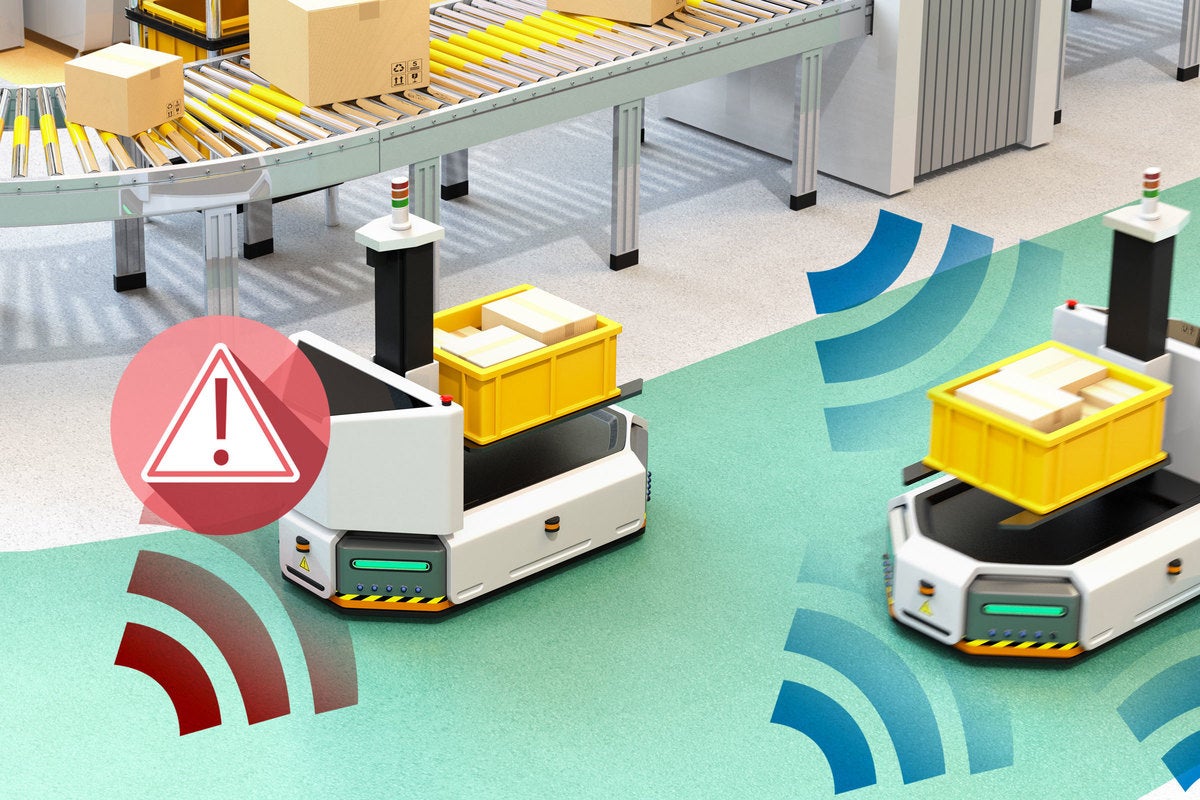 5G promises super-fast connections, low latency and better coverage. In the manufacturing realm, early adopter Whirlpool is deploying a private 5G network in one its Ohio factories to solve a major problem: Driverless vehicles inside the plant rely on Wi-Fi to navigate, and they stop dead when the factory environment causes the signal to degrade. The sidelined vehicles create traffic jams, slow down production, and require hands-on attention before they can resume delivering parts.

“It’s a cascading effect,” says Douglas Barnes, Whirlpool’s North American regional IT and OT manufacturing infrastructure-applications manager. “I’m not only late with that delivery but with everything stacked up behind it.”

The plant has full Wi-Fi coverage, “but the wireless is half useless, no matter what you do with it,” Barnes says, because the building’s construction isn’t suited to Wi-Fi. “It’s just a matter of how these plants are laid out…I’ve got metal everywhere. There are conveyor belts running on the ceilings,” he says. In addition, Barnes has to contend with radio-frequency interference. “Old equipment creates its own radio-frequency voice, and there’s old equipment everywhere.”

The vehicles can’t move reliably from one end of the plant to another, and “I can’t do anything about it without remodeling the whole factory,” Barnes says.

Until now. Whirlpool is working to convert vehicle connectivity from Wi-Fi to 5G, which is less susceptible to the interference, with the help of AT&T and Seegrid, the maker of the self-driving vehicles.

The vehicle conversions are straightforward, says Jeff Christensen, Seegrid’s vice president of product. “From our perspective, it’s just a matter of changing the type of radio receiver in our truck. Instead of listening to Wi-Fi frequencies, it is listening to 5G,” he says. “The vehicle itself is agnostic to what network it is on.”

For its part, AT&T is providing the 5G transmitting gear in the factory and making the 5G receivers that will be installed on the vehicles. That’s one of the reasons Barnes chose AT&T. Autonomous-vehicle makers and other IoT-device manufacturers are only now starting to build support for 5G, so, “We’re partnering with AT&T to build the 5G module, for them to fully convert the fleet over,” he says.

The first phase of the 5G rollout will cover 200,000 square feet in the center of the plant. AT&T will initially provide the 5G infrastructure and manage it, but over time, management responsibility will migrate to Whirlpool. “We will eventually take it on ourselves once we fully understand it,” Barnes says. After the transition, AT&T will be available on a consulting basis when problems need to be escalated.

Today, there are about 100 vehicles on the factory floor, with just a few that are driverless. When 5G is in place, Barnes expects that to rise to  80% , and their success could expand the use of such vehicles in other roles. “All of our tests have proven that we can get rid of driver-driven vehicles,” he says. “This will allow us to go to truly autonomous vehicles throughout the entire plants, for maintenance, for delivery, for everything to support the manufacturing operations.” That will add up to significant cost savings, Barnes says.

Barnes also sees opportunities to make use of 5G in other areas, including shop-floor applications, scheduling applications, and emergency management applications. “I can’t put them in there today because [Wi-Fi] is not reliable. When we get to 5G, that’s a different story.”

Meanwhile, in order to network the local 5G routers and other devices that don’t require wireless connectivity, Whirlpool is using optical cabling that’s already in place. “If you have to wire the whole plant, you’re going to struggle with the ROI…A single run can cost you $25,000 to $50,000,” Barnes says.

Once the plant project is completed, Barnes plans to deploy 5G in Whirlpool warehouses to provide connectivity to the autonomous vehicles there. “We’ve got wireless in warehouses today, but there are metal racks everywhere, and we have connectivity problems,” he says. “5G definitely fixes that.”

In addition to the on-premises 5G network, Whirlpool is looking to use AT&T 5G services for connections outside the factory walls. It will use the provider’s public 5G network when it’s available to provide a backup internet connection for the factory if the primary fiber connection fails. To that end, all the 5G routers Whirlpool is installing have the ability to switch over from fiber to the public cellular network.

“You might not do it as your primary connection because it’s expensive, but in a disaster-recovery situation, if it’s the difference between that and shutting the plant down, I’ll lose a whole lot more money if I have to close the plant,” Barnes says.

There’s a small maintenance fee to keep the backup option available, but otherwise the cost will be based on usage, he says. Then, it’s a simple flip of a switch to activate the 5G connection on the routers. “Even if you never use it, it’s still cheap insurance,” Barnes says. “And we’ll try to make it automated if we lose our primary circuit. I don’t know if that will work, but I’m going to try to set it up that way.”

For its part, AT&T is working hard to position itself as a preferred 5G vendor. In addition to working on pilot projects like Whirlpool’s, the company has launched a 5G innovation zone in Austin, Texas, in partnership with Samsung.

“The innovation zone is a research space designed to evaluate and implement 5G use cases for manufacturing environments,” says Robert Boyanovsky, vice president for enterprise mobility at AT&T Business. The researchers are working on developing 5G use cases using IoT, including video sensors, robots, augmented reality and virtual reality.

AT&T has a second project under way in Chicago with manufacturing-research institute MxD where AT&T will focus on another set of manufacturing-related 5G use cases. “These could include industrial IoT, predictive maintenance, remote machine monitoring, autonomous robots, mixed-reality training and spatial computing. We have seen many different types of manufacturing companies interested in 5G,” Boyanovsky says.

Back at Whirlpool, Barnes plans to use 5G over the long-term to move to more flexible manufacturing lines: “I want to be able to replace the copper cabling that’s in my conveyor-driven assembly line today and use 5G as the communication vehicle so I can configure and make changes to my line without having to rebuild hard infrastructure.”