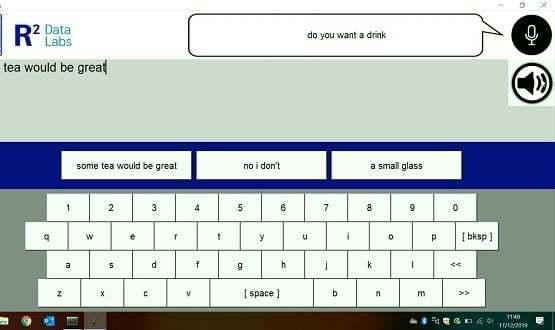 Rolls-Royce has partnered with the Motor Neurone Disease Association and leading IT companies to develop a machine learning communication system for people with motor neurone disease (MND).

Quips allows people living with MND to have a conversation through a computer using their own voice, words and colloquialisms, without having to type out responses or being limited to a prescribed set of words.

The platform uses voice-banking and machine learning to learn the individual’s unique language style and way of speaking, allowing them to use it in conversation.

It even includes slang and can adapt to different situations and people, such as work, home, or even the pub.

Communication is one of the most difficult aspects of living with motor neurone disease, which affects around 400,000 of the world’s population and kills more than 100,000 people every year.

Nick Goldup, director of Care Improvement for the MND Association, explained that communication systems for people with MND had changed little in recent years. Usually, users type what they want to say and the words are read out in a computerised voice.

Quips instead listens to the conversation, suggesting words and phrases that the user is likely to want to say based on previous conversations. They can then quickly select sentences, which are read out in their own voice, instantly and without gaps.

“Having your voice stripped away is one of the most brutal aspects of MND,” said Goldup.

“Technology that allows people to retain those things that make them unique – their voice, speech patterns, intonations and word choices – is a huge leap forward in enabling someone to retain their dignity and their sense of self. This is really exciting technology – and of course its potential use expands much further than just people with MND.”

Quips is borne out of Rolls-Royce’s R2 Data Labs, with the car manufacturer working in association with Computacenter, Dell Technologies, Intel and Microsoft.

The technology is in its early stages, but Rolls-Royce is aiming for it to be implemented into some of the leading augmented and alternative communication packages that already exist.

Stuart Moss, an IT Innovation strategist at Rolls-Royce, lost his father to MND on Christmas Day 2014. He started the Next Generation Think Tank earlier this year, alongside the Motor Neurone Disease Association.

Moss said: “Those with MND are often robbed of their ability to communicate with their loved ones, which can make the festive season particularly lonely and difficult. This technology will give people their voice back and is the first step in what I hope will be many innovations to come from the Next Generation Think Tank.”