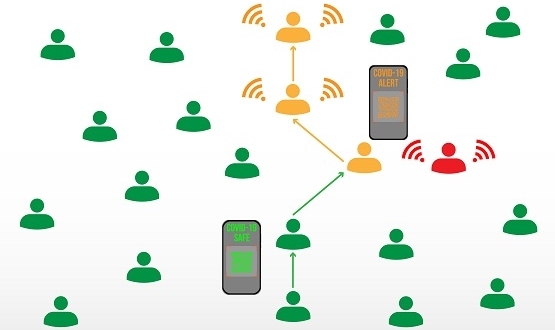 NHS Scotland has released its Covid-19 contact-tracing app to bolster its response to the pandemic – becoming the second country in the UK to do so.

The Protect Scotland app is designed as an “extra tool” to support the manual contact-tracing already in place under NHS Scotland’s Test and Protect system.

First Minister Nicola Sturgeon urged smartphone users to download and use the app to help suppress the virus.

Based on Bluetooth technology, the app anonymously alert users if they have been in close contact with someone who has tested positive for Covid-19, and advises them to self-isolate.

Users of the app who test positive will still get a call from a contact-tracer to confirm their details and who they have been in close contact with.

The app, based on Ireland’s Covid Tracker code, does not store details about an individual or their location. Instead it uses encrypted, anonymised codes exchanged between smartphones to determine all close contacts.

Sturgeon said: “This will support the work of NHS Scotland and has the potential to help avoid local lockdowns.

“The more people who download and use the app, the more effective it can be in helping to make connections that may otherwise have been missed. This will allow people to self-isolate quickly if they are exposed to the virus, reducing the risk of them infecting others.

“We all have a part to play in suppressing the virus, and downloading the app – alongside other vital measures such as following hygiene and physical distancing guidance – will help protect you, your family and your community.”

The app was designed by software developers NearForm using the same technology as the Republic of Ireland and Northern Irish proximity tracing apps.

The code for Ireland’s Covid Tracker app was made public in July as part of an open source programme to help global public health authorities tackle the pandemic.

The code has been used to develop apps in Gibraltar and Northern Ireland, as well as other countries in Europe, the Middle East and Africa, and states in the US.

Shortly after the code was published Northern Ireland released its contact-tracing app to become the first country in the UK roll-out the technology.

Speaking on the launch of the Scottish app Cian Ó Maidín, chief executive of NearForm, said: “This open source technology was built with privacy and data protection at its core and, through anonymous keys, allows Scottish citizens to engage, protect each other and break transmission chains.

“The Scottish Government has taken a great approach, using open source software, that has been peer reviewed and rolled out successfully in Ireland and Northern Ireland.”

The NHS Covid-19 contact-tracing app is set to launch across England and Wales on 24 September.

It uses Bluetooth technology to track time and distance between smartphone devices. It also offers a QR code check-in capability, allows users to book a free test and has an isolation countdown timer to remind people to quarantine.

NHSX announced in March that it was working on a contact-tracing app to help control the spread of the virus.

The organisation faced fierce criticism for its decision to develop a centralised system, differing from tech giants Apple and Google who teamed up to developed decentralised contact-tracing technology.

Despite privacy concerns NHSX launched a trial of its contact-tracing app on the Isle of Wight in the first week of May, with a national roll-out date expected by mid-May.

In June, after several revised roll-out dates, the government abandoned its model in favour of Apple and Google’s tech. At the time it had spent £11.8m developing the app.

A trial of a new app, based on Apple and Google’s technology, was launched on 13 August.

You can read more about the NHS contact-tracing app timeline here.