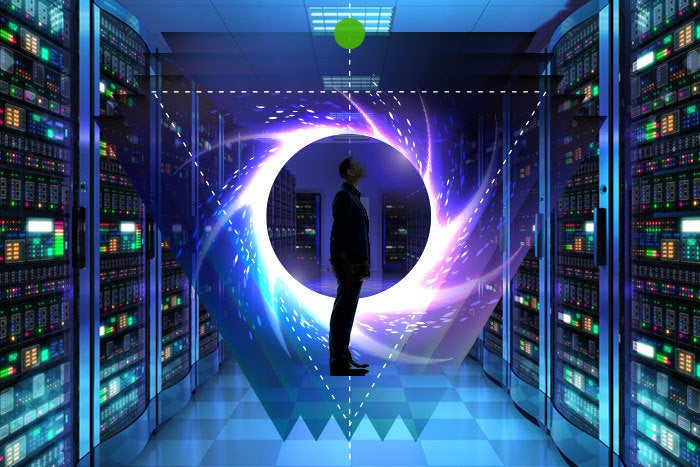 Hyperconvergence is an IT framework that combines storage, computing and networking into a single system in an effort to reduce data center complexity and increase scalability. Hyperconverged platforms include a hypervisor for virtualized computing, software-defined storage, and virtualized networking, and they typically run on standard, off-the-shelf servers. Multiple nodes can be clustered together to create pools of shared compute and storage resources, designed for convenient consumption.

The use of commodity hardware, supported by a single vendor, yields an infrastructure that’s designed to be more flexible and simpler to manage than traditional enterprise storage infrastructure. For IT leaders who are embarking on data center modernization projects, hyperconvergence can provide the agility of public cloud infrastructure without relinquishing control of hardware on their own premises.

How does hyperconvergence differ from converged infrastructure?

Converged infrastructure involves a preconfigured package of software and hardware in a single system for simplified management. But with a converged infrastructure, the compute, storage, and networking components are discrete and can be separated. In a hyperconverged environment, the components can’t be separated; the software-defined elements are implemented virtually, with seamless integration into the hypervisor environment. This allows organizations to easily expand capacity by deploying additional modules.

What are the benefits of hyperconverged infrastructure solutions?

Hyperconverged infrastructure promises to deliver simplicity and flexibility when compared with legacy solutions. The integrated storage systems, servers and networking switches are designed to be managed as a single system, across all instances of a hyperconverged infrastructure. The inherent management capabilities enable ease of use, and software-defined storage is expected to yield greater scalability and resource efficiency. Companies can start small and grow resources as needed. HCI vendors also tout potential cost savings in areas including data center power and space; IT labor; and avoidance of licensed software such as backup or disaster recovery tools.

Which workloads are candidates for hyperconvergence?

HCI systems were initially targeted at virtual desktop infrastructure (VDI) and other general-purpose workloads with fairly predictable resource requirements. Over time they’ve grown from being specialty solutions for VDI into generally scalable platforms for enterprise applications, database, and private cloud, according to research firm Forrester.

In a survey of infrastructure pros whose firms are planning, implementing or expanding their use of hyperconverged systems, Forrester found the most common workloads being run on hyperconverged systems are: database, such as Oracle or SQL server (cited by 50%); file and print services (40%); collaboration, such as Exchange or SharePoint (38%); virtual desktop (34%); commercial packaged software such as SAP, Oracle (33%); analytics (25%); and Web-facing workloads such as LAMP stack or web servers (17%).

A couple of key developments have made HCI more appealing for more workloads. One is the ability to independently scale compute and storage capacity, via a disaggregated model. The other is the ability to create a hyperconverged solution using NVMe — an open logical device interface specification for accessing non-volatile storage media attached via a PCI Express bus — over fabrics.

In general, there is a greater understanding of the value proposition of HCI, “specifically for smaller enterprises that may not need [or] want a full-scale data center infrastructure, but want to retain some control over their environments,” says Sebastian Lagana, research manager, infrastructure platforms and technologies, at research firm IDC. (Read more: Hyperconvergence not just for specific workloads anymore)

“The increasing use of hybrid cloud environments by enterprises also lines up nicely with the software-defined data center story, which HCI is certainly a large part of,” Lagana says.

How is hyperconverged infrastructure sold?

Hyperconverged infrastructure is available as an appliance, a reference architecture, or as a software-only model. Bundled capabilities such as data deduplication, compression, data protection, snapshots, WAN optimization, and backup/disaster recovery differentiate vendors’ offerings.

HCI hardware typically comes in the form of an integrated appliance, a hardware/software package created and delivered by a single vendor. Appliance vendors include Dell EMC, Nutanix and HPE/SimpliVity.

“Users don’t need to worry about the underlying hardware, as the vendor takes care of everything,” explains Darren Wright, president of D2 Technology, a New Castle, Del., IT consulting firm. “Because they are closed systems, the vendors have better control of the hardware, which eases troubleshooting and performance optimization,” he adds.

A software-only offering allows customers to deploy HCI on a bring-your-own-technology basis. HCI software vendors include Maxta and VMware (vSAN).

“I can choose whatever server vendor I want, and even change server vendors at any time,” says Larry Chapman, IT infrastructure manager at Trusource Labs, a technical support services company that offers support for IoT technologies. “There’s no need to keep the same server vendor or even the same generation of Intel chipset.”

Chapman also likes that fact that he owns the software license. “We can transfer this license to a new server,” he says.

Software-based HCI products also can be configured to match a customer’s CPU, memory and storage needs without overprovisioning, says D2 Technology’s Wright. This allows adopters to easily scale up or out, which can make software-based HCI easier to manage and less expensive to operate.

Hyperconvergence is winning over enterprises that are drawn to its potential to ease management, streamline the deployment of new workloads, and optimize infrastructure costs.

As much as 20% of business-critical applications currently deployed on three-tier IT infrastructure will transition to hyperconverged infrastructure by 2020, predicts Gartner, which recently gave the technology its own magic quadrant.

This story, “What is hyperconvergence?” was originally published by