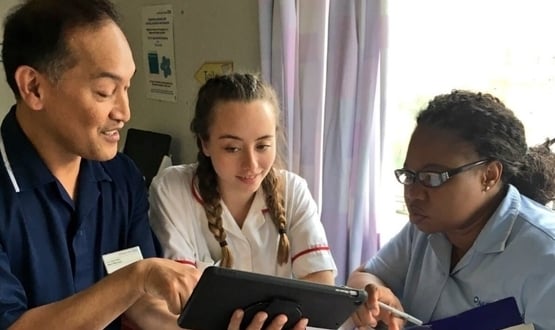 Staff at Whittington Health NHS Trust are now able to have a “complete picture” of their patient’s vital signs after System C’s CareFlow Vitals was deployed.

The trust is a “fast follower” in NHS England’s flagship Global Digital Exemplar (GDE) programme, which meant it received £5m national investment that it had to match with £5m of its own funding.

Aside from receiving money for digital investment, the trust has also partnered with University Hospitals Bristol NHS Foundation Trust which is one of 16 acute GDEs and also recently went live with CareFlow.

The technology has been rolled out across the adult wards, meaning staff are now recording details of a patient’s vital signs like breathing, blood pressure, oxygen saturation levels, pulse and temperature onto iPads instead of onto paper charts kept at the end of their bed.

Sam Barclay, CCIO at Whittington Health, told Digital Health News that the project had been “clinically led” to ensure there was engagement from staff.

He also added that having everything on a screen means clinicians have a “complete picture” of a patient’s medical information which can result in faster and safer care.

The response from staff, according to Barclay, has been positive and ward sister, Tisenia Alombro, said the system has been “really effective”.

She added: “It was easy for us all to pick up because it is so intuitive to use. It has given us a real picture of how sick our patients are and where we need to focus our time as nurses.

“It has also made our handovers between teams more efficient and data driven.”

The development of CareFlow Connect was part-funded by the SBRI Healthcare programme, an NHS England initiative which is designed to accelerate the development of new technologies that meet the needs of the NHS.

Dr Bloor spoke to Digital Health News about the GDE digital “blueprints”, toolkits which allow any NHS hospital to implement improvements quicker and transform care for both patients and staff.

He said he believed the toolkits could be “transformational”, adding it creates “collaborations” between NHS trusts.

But Michael Fisher, CCIO of Royal Liverpool and Broadgreen University Hospitals NHS Trust, told Digital Health the blueprints would be “useless” without allocation of resources for trusts to teach others how to implement the programmes.